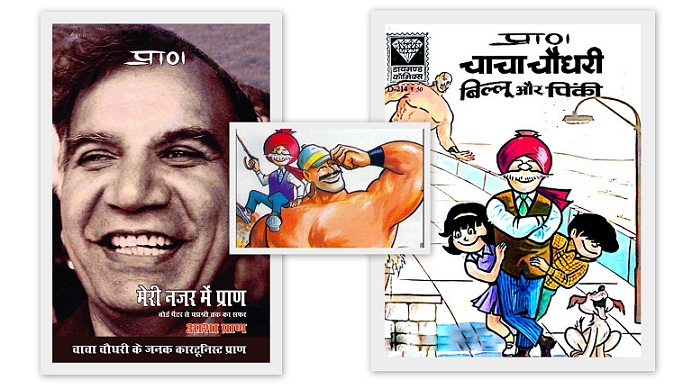 Ninad Jadhav – Born on ’11-07-1977′ in Jabalpur, Shri Ninad Jadhav Ji, fond of reading comics since childhood. Ninad Ji’s family has thousands of comics in his collection and Ninad Ji, Tanay and Anay- Aditya Jadhav’s having their names in the Limca Book Of Records. The record consists ‘The Alphabetical (A to Z) Comics’ published by several comics publication. They also got appreciation and their name in the ‘Pondicherry, Book of Records’ for the collection of very first released comics of numerous superheroes.

“Meri Nazar Mein Pran” penned by Smt. ASHA PRAN JEE is a must read for all the fans of Cartoonist PRAN SAAHAB. Before reading this book l was just another die-hard fan of the Legend but now l am a follower of “PRAN JEE“.

Year 2020 is nearing it’s end but I will cherish this year for this masterpiece as it is autographed by none other than by “Smt. ASHA PRAN JEE”. I received it today and the first thing which attracted me towards the book was it’s cover page with the laughing face of ‘PRAN JEE‘. This is the first book of my life which I completed without taking a single break. It was like watching a biography in front of my eyes.

How vividly his journey is portrayed from birth till he breathed his last. His struggle for survival as a refugee coming from Pakistan, how he studied amidst all obstacles, his love for his Mother, his marriage, how he came up with his Immortal Characters for different publications, a visit to his ancestral home in Pakistan, his tours abroad, his passion towards his work and so on.

His views on life, his positive attitude towards the Girl~Child, his discipline towards his work and above all to remain such humble touched me the most. I can say it very clearly that my favorite Indian characters were all created by PRAN JEE, ‘Bahadur’ by the Living Legend AABID SURTI JEE, ‘Aditya’, ‘Dara’, ‘Ram-Rahim’ and ‘Nagraj’.

I possess many collectibles related to Comics’ Heroes. I do have some watches of ‘Chacha Chaudhary’, an old one from ‘Rochees’ Watches. I own it since 2006. 3-D posters and a sketch of ‘Chacha Choudhary’ gifted by Artist ‘Shambhu Nath Mahto’ Jee (Creative Head-Comix Theory). I will in near future also order the Limited Edition merchandise from ‘Nush’ and other collectibles from the website – Chacha Chaudhary

In 2017 my entry in Limca Book of Records for my collection (along with Tanay and Anay~Aditya Jadhav) of Inaugural issues comics of A-Z Comics’ Heroes is dedicated to PRAN SAAHAB, AABID SURTI JEE, ANANT PAI and RAGHUVEER YADAV who played the role of Chacha Choudhary in a TV serial.

In my recent interview with Mr. Saikat Bose titled “Bhaartiya Comics Aur Hum” l have clearly mentioned the name of “Chacha Chaudhary” followed by ‘Bahadur’ and ‘Nagraj’ as my favorite Indian Comics Heroes and ‘Phantom’ as my favorite foreign Comics Hero.

After watching this interview my Father who is 77 years old now rightly said that ‘Chacha Chaudhary’ is the real Superhero of India. Undoubtedly there will be millions like me whose favorite Comics Hero will be “Chacha Choudhary-The larger than life character” followed by other awesome characters of the Legend.

My quest to rediscover the Legend started after reading this masterpiece and I request ‘Asha Jee’ to add more and more pages and truly 80 pages are not enough to know him. I repeat again- This Masterpiece is a must read for all the fans of “Cartoonist PRAN SAAHAB“.