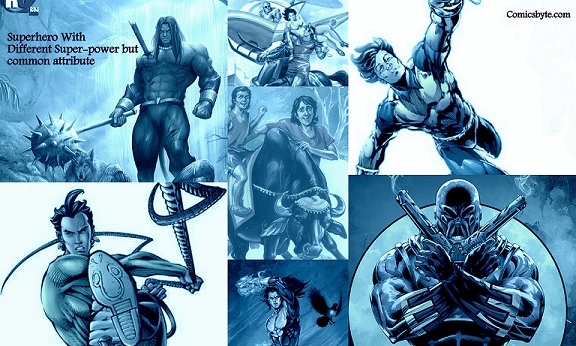 “Raj Comics” has been entertaining us for the last 4 decades, over the years Raj Comics created over 40+ superheroes. Some were lost in the dust, some got back to life and some were brought back to the ‘Sarvnayak’ series. All Super Heroes have some specialty, such as ‘Inspector Steel’ who is a Humanoid or ‘Gojo’ who holds the ‘Sapta Shakti’. There are some heroes who can talk to animals / birds / aquatics / reptiles. So let’s see who are they and with whom can they talk –

Dhruv can talk to many animals and birds. One such incident when a bird taking him to an accident site in the ‘Daldal’ comics or when the ‘Lion’ cut his rope in ‘Pratisodh Ki Jwala’ comics while ‘Jubisko’ and ‘Bond’ was hitting ‘Dhruv’. He can also talk to dolphins through whistles. Even dogs often take him to criminals.

‘Bhediya’ lives in the forests of Assam and his field of work is also a forest. Bhediya is an animal plus human, and in time he can summon a whole army of wolves, which keeps the criminals in tears. By the way, in the comics called ‘Kobi and Bhediya’, He got divided into two forms, then the power to call wolves comes to ‘Kobi’. While ‘Bhediya’ lives with ‘Fujo’ baba and he can also talk to birds and animals, but he is not a superhero.

Doga is a fire fountain that does not solve the problem, but uproots it from the root. The hero one of a kind who looks like a dog (can also termed as Antihero) and his ground is in Mumbai. In the morning, he exercises a lot in the gym in the form of his alter-ego ‘Sooraj’ and gives training to his disciples, but by night he becomes ‘The dreaded Dog’ wearing a dog mask. Doga’s dress and weapons are kept in safe places by the stray dogs whom he calls and becomes ‘Doga’ by blowing an ultrasonic whistle. A comics were also printed on Doga’s dogs and the name was ‘Kutta Fauj’. A special comics were also published under the name of ‘Dog Training’.

Ashwaraj is a resident of Ashwalok. To grab his kingdom, Satan ‘Toota-Boota’ created a dangerous ‘Talism’. Ashwaraj broke the ‘Talism’, also received the treasury and known as “Talism Ka Khiladi”. Ashwaraj is an ‘Ashwamanav’ and he also has a special chariot with 5 horses (discussing them in details some other day), out of which ‘Ashwavat’ can talk like humans and the rest of the horses can talk to ‘Ashwavat’ and he can convey the thoughts to Ashwaraj. It works vice-versa like horses to ‘Ashwavat’ to ‘Ashwaraj’ and ‘Ashwaraj’ to ‘Ashwavat’ to horses.

Gamraj lives in Mumbai and is the son of ‘Yamraj’. The sorrow of the world couldn’t be seen by him, therefore, to deal with miscreants and criminals, ‘Yamraj’ gives him a divine bull named ‘Yamunda’. ‘Yamunda’ is a vehicle and when Gamraj called him, he appear’s from anywhere in the air and also has the power to change its form, meaning he can transform himself into any vehicle. In the comics called ‘Doga Ne Mara’ and ‘Jungle Mein Dangal’, he spoiled both ‘Doga’ and ‘Kobi’, respectively. Only Gamraj can talk to Yamunda and the conversation B/W them is really funny.

Anthony is a dead corpse. Whose cold fire not only tortures, but is like a fire coming straight from hell. He lives in the graveyard of ‘Roopnagar’ and whenever a crime is committed to someone, his crow ‘Prince’ shouts in a loud voice and ‘Anthony’ comes out of the grave by tearing it in half. Only ‘Anthony’ can talk to ‘Prince’ and ‘Prince’ nod in return to understand his words and answers. In the comics issue titled ‘Thandi Aag’, Prince and his raven troop also cut loose the lives of ‘Adrak Chacha’, ‘Doga’ and ‘Mumbaikar’.

There is no city for Nagraj, he was just a wandering young man who was given new life by ‘Baba Gorakhnath’ and stood as a wall against terrorism. Nagaraj is a willful ‘Snakeman’ and he is also the emperor of all serpents on earth. He can talk to all snakes via his mental signals, but to some wishful snakes, he can also speak verbally (Like Naagu and Soudangi). When he came to the Mahanagar, he spread his team of detective snakes across the city to clean the city from goons. His two most trusted generals are ‘Naganand’ and ‘Nagnath’. In the comics called ‘Nagaraj and Bugaku’, two giant pythons appear on his call tearing the earth and pulling ‘Bugaku’ back into the earth.

Hope you like the above facts, thank you – Comics Byte!