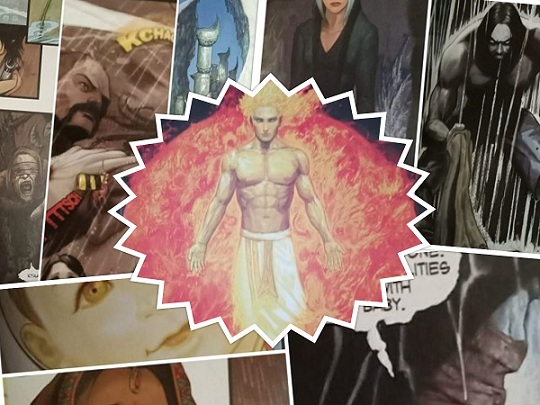 Shambhu Nath Mahto is a Comic Book Illustrator, Writer and an Editor too. He is the creative head and editor of ‘Comix Theory’. Apart from this, He has also written a book named ‘Savitri – Mrityu Gyanam’. He is also actively working on the Indian Comics, Fan History & a full fledged Documentary to be made in near future.

DEVASHARD – at first light is a graphic novel inspired by great Indian epic “MAHABHARATA“. Mahabharata is an epic which has crossed geographical boundary and have been adopted and transformed into many genres and forms from centuries. Comics and graphic novels are such a form where it has inspired many across the globe.

It’s a storyline inspired from ‘Mahabharata’ and is loosely based on ‘Sootputra Karna’ and how he was born, left, discovered and saved by the charioteer. What’s out of the box? Something fantastic, it has many new elements and characters creatively introduced in the storyline, for example – an assassin character assigned to kill the main Protagonist. Who? Read it yourself to know more!!! This story is weaved into a bizarre world where the ancient portal exists to travel for long distances and in different worlds where dragons are reality (Yeah GOT fellas, sink this). Reminds me of some of the early 2000 era video games which are so popular at that time. WOW (Google if you don’t know)! As the Hong-Kong city was also a major hub for video games & this connection or creative take is not very unusual.

Artwork and coloring is excellent and the storyline is gripping. The artwork is done by Keith Burns, inking Ken Cheung, awesome colors Johnny Tam, Letters of Keith Burns and Helen Griffiths. The writer is Zen. Cover art is by Keith Burna and Johnny Tam. Director in production is Harsh Sabale, and director -chief executive office is Simon Squibb.

Produced in 2008 this graphic novel, which was announced as 50 part series was applauded by then audiences and digital media. And announcement about a Devashard Action movie was also there in the media. The hype was well placed and content was well received by the media.Though the production of these seems to be halted or closed and this looks out of print for sure. It’s a long journey and we have seen only covers if 2 parts, of which this is the first issue. 12 years now, Comics Collectors and Readers both are going to cheer on this fabulous feat of artistic achievement of a Singapore based company who worked on Indian Epic to create their fantastic work of entertainment!! Yes, yes!!! You heard it right “Entertainment” what they meant it in their preface. And they did it fantastically.

Nothing to worry about if it’s not an Indian company… our indie epics Ramayana and Mahabharata are beyond modern geographical limits. And the storyline with which this comics moves portrays that boundary- less epic imagination.

If you want to experience a really fantastic take on being inspired by Mahabharata this is it. After 12 years serious collectors might want to grab a copy for their collection, and if you are a collector, you might have some justified option to skip this one for your collection, but if you are a real comics reader, you don’t deserve to skip this title… not after 12 years stalls when it’s available at your fingertips.

Just grab it from anywhere or die wanting a superb content!!
From where to grab it? MRP BOOK SHOP has it and with an awesome offer!! MRP is 195/- Rupees only, but it’s available in discounted Price of 160/- Rupees with free shipping, with referral code: CB WhatsApp to 9716960402. Way much cheaper than what it is at the time of release. You can also grab it directly ordering on WhatsApp or through the website.