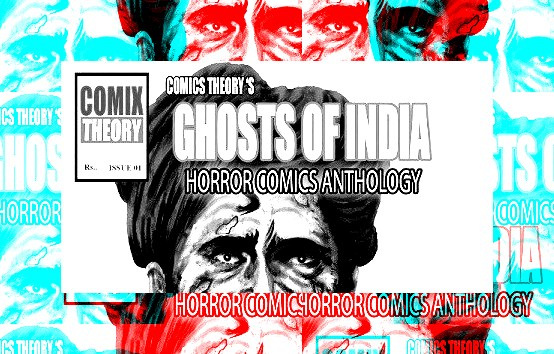 It was May the 13’th 2018 the day ‘Ghosts Of India’ – ‘A Horror Anthology’ was released to the world… well actually in their stall at “Indie Comics Fest” in Noida! What was interesting about this, it was the first comics of “COMIX THEORY”. There was extreme excitement and fun at the stall, lots of comics industry artist young and old, comics readers were present on the stall. The one thing which was uniquely prepared was the A3 size collector’s edition of GHOSTS OF INDIA comics!

As in the regular comics, the big size comics also have 32 pages with original art section. This concept of having a page in the comics for making a manual original art for the customer was unique and one of its kind! Think how many original comics art was made and readers and collectors have them…. HUNDREDS OF THEM OUT THERE!

Unique and outstanding piece of collectible in itself! What was another thing which was consciously made into unique comics is having the biggest comic of India by having bigger size comics than the A3 size itself. It was the first time that such a big comic was published and sold in India.”

Usually we see A4 size comics format. It was difficult to have this much size in print and getting it done, but Comix Theory made it possible and now this A3 size collector edition is something every Indian comic collector must have in their collection. This big size comic is celebrated among the big comics collectors of India. It was priced 600/- Rupees at 2018 and yes with the original art included in the page 32.

Before you jump to grab your copy, have a look at the collector edition itself at comix theory live

Making such pin ups or artwork itself costs thousands of rupees but Comix Theory made this unique feature in budget and in view to give collectors a beautiful comics unique in itself because no art is same on any copy of the comics and some time readers & collector were surprised to see manually penciled inked and colored art all in the same price. As we talked about it to Comix Theory they told us that, “all these efforts were part of making Comix Theory reached to readers and collectors alike, to make reading and having hard copies of comics fun and celebrating it!

Comics Theory invested in these comics much more than the morph cost of it, they quoted “Our passion for comics to provide readers the best which a publisher can, What no one does is done by us…!! The best from our heart!”. As we were told that people frequently demand the A3 size comics, but in past Comix Theory had stopped its sale -purchase activities due to its involvement in some other projects. But now with the emergence of MRP BOOK SHOP in last year august 2019 and supporting its growth and unique vision, ‘Comix Theory’ has decided to provide their comics and other products especially ‘Ghosts of India collector’s edition A3 size‘, the biggest comics of India exclusively made available through them. This sounds a good news to the comics collectors and a must “first grab it” moment!

Here is info on how you can secure your copy of collector’s edition of Ghosts of India:

Hope you like the information in the article, Keep reading, keep sharing – Comics Byte!